According to Bloomberg Green just five of the 39 largest oil and gas companies have announced carbon-reduction targets that match levels needed to avoid a 2-degree Celsius temperature increase. And only 20 have taken initial steps to disclose how they plan to lower emissions produced by both their operations and electricity use, known respectively as Scope 1 and Scope 2.

Put those facts together and it may seem like most of the world’s biggest polluters aren’t serious about climate change. The list of passive offenders includes four of the top-five ranked energy companies by stock market value: Chevron Corp., Exxon Mobil Corp., PetroChina Co. and Saudi Aramco. 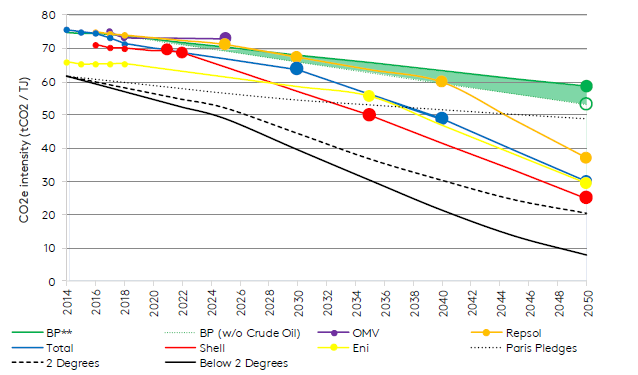 The score allows investors to measure oil and gas companies’ progress in reducing their operational emissions intensity, Kane said. It also shows how they are positioned relative to each other and the IEA benchmark, assuming they are successful in achieving their publicly stated greenhouse gas reduction targets, he said.

“Despite the risks, many companies have yet to develop reduction strategies,” Kane said.

Of the 39 energy firms, just eight have established plans to lower Scope 3 emissions, which are generated when their customers burn fossil fuels, a figure that comprises about 80% of total greenhouse gases at large oil companies. That suggests most companies in the industry are likely to face significant challenges as the economy shifts away from carbon-intensive energy, Kane said.

The European integrated oil companies have set more ambitious targets than competitors from other regions, he said. Italy’s Eni aims to have net-zero “upstream emissions” by 2030 and net-zero emissions for the entire company by 2040. Royal Dutch Shell Plc, BP Plc, OMV AG, Repsol SA and Santos Ltd. have said they’ll aim for net zero by at least 2050.

France’s Total, Portugal’s Galp Energia, Norway’s Equinor SA, India’s Reliance Industries and BP have the best carbon transition scores, according to Bloomberg Intelligence. Valero Energy Corp., Formosa Petrochemical Corp., Indian Oil Corp. Gazprom Neft PJSC and Phillips 66 have the worst, because they have yet to even set carbon reduction targets and provide little or no information about their recent emissions performance, Kane said.

By 2030, oil and gas companies must reduce their operational Scope 1 and 2 emissions intensity by 44% as compared with 2018 levels to be aligned with limiting warming below 2 degrees Celsius. The IEA estimates that a majority of these reductions can be achieved by cutting methane emissions. That means oil production needs to drop to 84.3 million barrels a day by 2030 (compared with 95.4 million in 2018), while natural gas production must increase to 3,998 billion cubic meters (as compared with 3,937 in 2018), according to the IEA.

Given that Scope 1 and 2 emissions from companies account for almost 4% of global emissions, the failure to meet these targets could have a significant impact on the environment, Kane warned.