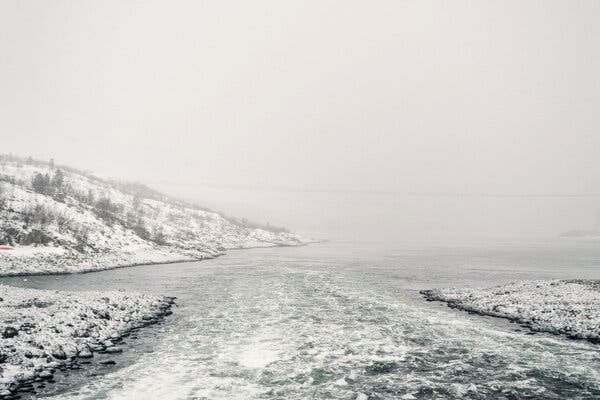 OSLO, Norway — The Norwegian Constitution declares that all citizens have the right to a healthy environment. But Norway’s economy is built around an oil and gas industry that accounts for more than half of national exports.

Now the country’s Supreme Court is being asked to confront this apparent paradox, as it hears a challenge by environmental groups seeking to invalidate licenses for new oil exploration in the Arctic on constitutional grounds.

The case, which began on Wednesday before a bench of 15 voting Supreme Court judges — a procedure reserved for the most significant issues — is the first climate-change litigation to be brought under the Constitution’s environmental provisions, which were passed in 2014, and experts said it was unclear how the judges would rule.

It is also among the highest-profile cases in a series of climate-change lawsuits brought by activists in Europe and elsewhere — one that Norwegian news outlets have described as “the case of the century.”

A victory for the environmental groups, said Hans Petter Graver, a law professor at the University of Oslo, could force Norway to phase out activities like oil exploration, a cornerstone of its economy.

The litigants, who include Greenpeace and Nature and Youth Norway, say they are also suing on behalf of future generations, arguing that approving oil exploration violates human rights conventions because of its contribution to increased carbon emissions.

A major cause of climate change is the burning of oil and other fossil fuels, which releases carbon dioxide — a powerful greenhouse gas — into the atmosphere, where it acts like a blanket, trapping the sun’s heat and driving global warming.

The lawsuit “is our generation’s best shot to make sure a significant amount of carbon dioxide stays buried under the ground and never gets burned,” said Andreas Randoy, deputy head of Nature and Youth Norway, adding that a victory would mean “the beginning of the end of the oil age.”

“The government knows that oil and gas contributes to creating a climate crisis,” said Frode Pleym, leader of Greenpeace Norway. “Still, it is giving license to explore for oil.”

The Norwegian government has said that it fulfilled its constitutional duty by compensating for negative effects on the environment in other areas, and that an expansive interpretation of the Constitution’s environmental provisions would “change the relationship between state powers in a fundamental manner,” and potentially erode democracy.

Two lower courts have declined to invalidate the exploration well licenses issued by the government, though both recognized the right of citizens to bring cases under this article. A higher court was more vocal that the right involved the impact from climate emissions — including those from oil and gas exported abroad.

Companies were awarded licenses in 2016 to conduct exploratory drilling in the South and South East Barents Sea, an area on the Norwegian continental shelf spanning about 77 acres where oil and gas fields have recently been built. Parliament approved opening the area for exploration three years earlier.

The environmental groups argue that the oil-exploration plans were not fully researched before being approved. They have also pointed to a previously unknown expert report throwing doubt on the economic benefit of drilling in the Barents Sea, which was commissioned by the government in 2013 but not passed onto the Parliament before its vote.

The case builds on an emerging wave of climate change litigation from environmentalists in Europe and elsewhere. Last year, the Netherlands became the one of the first nations required by its courts to act over climate change: Its Supreme Court ordered the government to cut the nation’s greenhouse gas emissions by 25 percent from 1990 levels by the end of 2020.

But the case is especially pertinent in Norway because of its position on the forefront of the international race for oil in the Arctic, even as it has implemented ambitious emission reductions goals.

Across the Norwegian continental shelf, there are about 89 petroleum fields, according to the government. Only two of them are in the Barents Sea, a lucrative area that the government has increasingly opened for exploration in recent years, estimating it holds half of the shelf’s undiscovered resources, but that the World Wildlife Fund has called “one of Europe’s last large, clean and relatively undisturbed marine ecosystems.”

While the lawsuit specifically concerns the licenses approved for exploration in 2016, the government has continued requesting such licenses — saying it would open more of the Barents Sea for oil and gas exploration in June.

“The Arctic is in crisis largely because of existing emissions,” said Gail Whiteman, the founder of Arctic Basecamp in Davos. “Any new drilling goes again a science-based approach to climate change and is at grave odds with Norway’s image as a leading green economy.”

The use of human rights in climate change litigation was a “recent phenomenon” pushed forward by groups who felt that they had run out of other options to force action, said Ole W. Pedersen, a professor of environmental and energy law at Newcastle Law School in England. “It’s a last resort.”

The crux of the case would be how much discretion the courts would allow the government, said Esmeralda Colombo, a fellow at the Center on Climate and Energy Transformation at the University of Bergen. In general, Norway’s Supreme Court has leaned in favor of environmental protection, she said, adding that claimants won a small victory in the last ruling when judges ordered the government to share in paying the costs of the case.

It will also raise questions such as whether Norway is responsible for the emissions burned from its exports — which are far greater than its domestic emissions.

The United Nations Special Rapporteurs for Human Rights and the Environment, among other environmental institutions, have submitted statements in support of the case. Groups have been crowdfunding to help cover legal cost, raising a total of about $270,000 from donors including the Swedish activist Greta Thunberg, who donated about $29,000 from prize money, according to Gaute Eiterjord, a student involved in the lawsuit.

In all, between 2015 and May 2020, 36 rights-based lawsuits have been brought against states for human rights violations related to climate change, according to the Grantham Research Institute on Climate Change and the Environment.