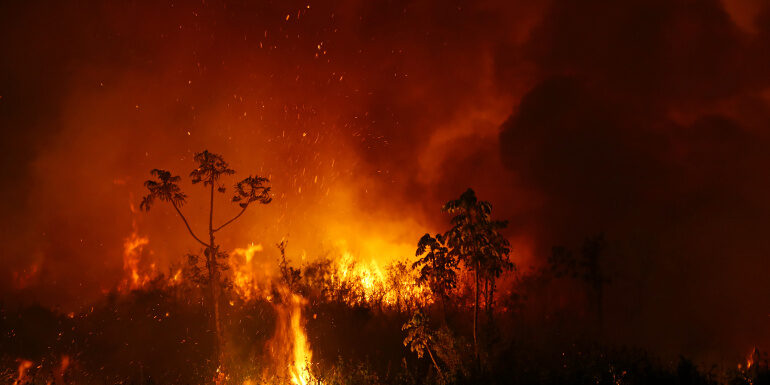 In Brazil’s Amazon increased in October for the first time in four months, government data showed on Friday, as the destruction of the world’s largest rainforest remains high under right-wing President Jair Bolsonaro.

But monthly deforestation eased from its peak from July to September as the rainy season began, making logging difficult. Forest clearances are down 6 percent in the first 10 months of 2020, compared with the same period a year ago, to 7,899 square kilometres (3,050 square miles), INPE found. That is roughly 10 times the size of New York City.

Destruction in 2020 continues to be far higher than in the years before Bolsonaro assumed office on January 1, 2019. Bolsonaro has weakened environmental enforcement and called for more farming and mining in the Amazon to lift the region out of poverty, which environmental advocates say is emboldening Brazilians to cut down the forest.

Brazil is expected to release its official measure of 2020 deforestation by year’s end, which is usually far higher than the preliminary figures. That measure, called PRODES, compares satellite images at the end of July 2020 to those taken at the beginning of August 2019 to detect forest clearances. There are fewer clouds in that period to obscure deforestation.

Separate INPE data also show that fires, which are typically set to clear land for agricultural use after cutting down the trees, have increased 20 percent in the Amazon from January 1 to November 12, compared with the same period a year ago – the highest number of fires in a decade.

Continuing high destruction could draw the scrutiny of US President-elect Joe Biden, who repeatedly mentioned late in his campaign the need to protect the Amazon.

In the first presidential debate, Biden said that the world should collectively offer Brazil $20bn to stop Amazon deforestation and threatened unspecified economic consequences if the country did not.