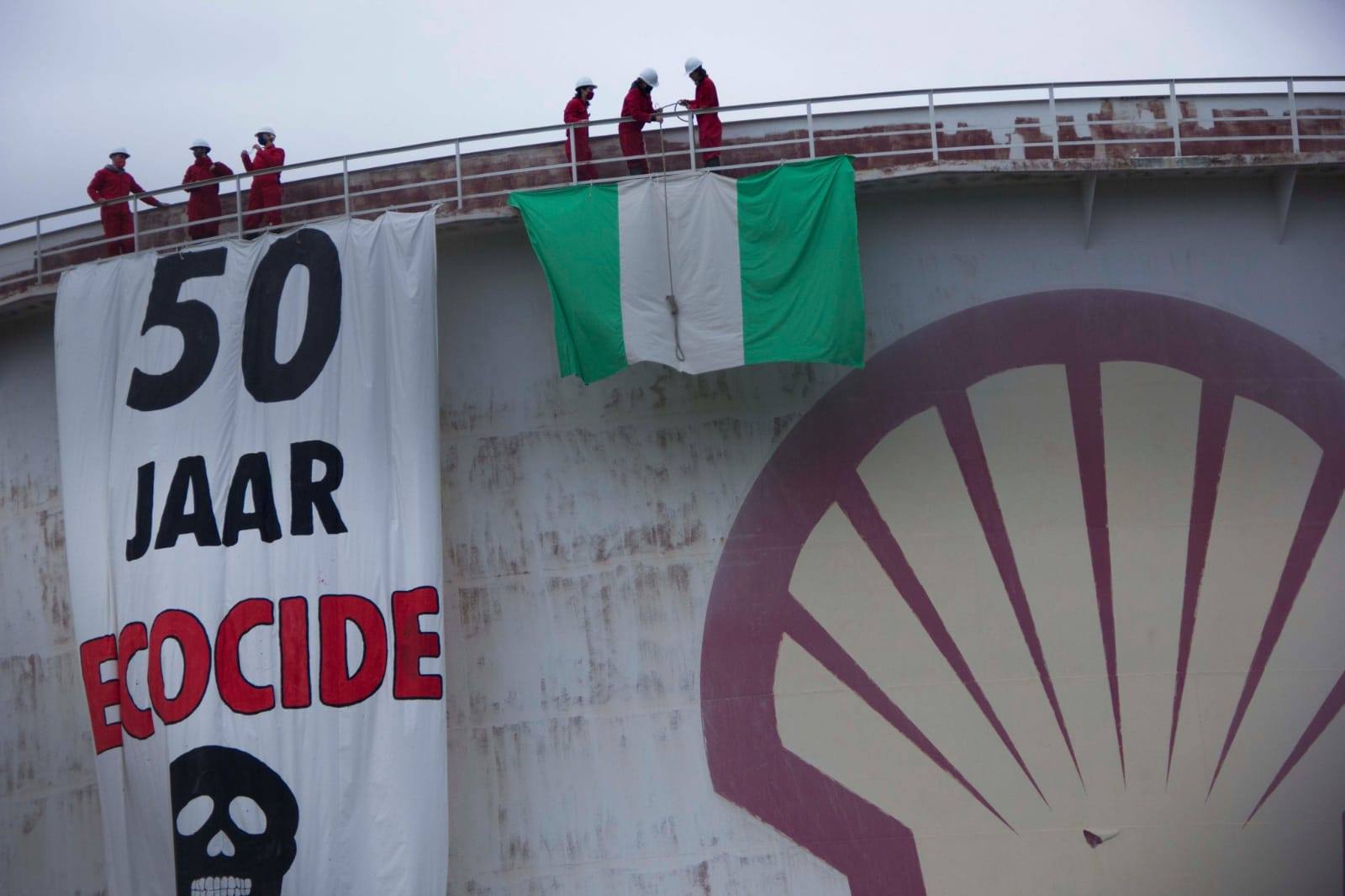 Activists have mounted demonstrations at Shell’s headquarters in London and The Hague, in protest over the killings of the Ogoni 9 in Nigeria, 25 years ago.

Eight activists from Extinction Rebellion Rotterdam climbed a Shell storage tank in Pernis. A spokesman for the group, Marjolein: “Although Shell is obliged to clean up the oil, they appear to be failing to deliver on their promises as always. That is why today we protest at one of Europe’s largest oil refineries: to show that Shell cannot get away with this and to encourage the people in the Ogoni area. ”

Extinction Rebellion participated in the protest in London. The NGO said one person had dressed up as a Shell executive, on a tripod, who then poured oil onto a noose on the company’s doorstep. Police arrested one person.

The Dutch branch of Extinction Rebellion replaced Shell’s flag with a banner calling for “Justice for the Ogoni 9”, in The Hague.

Throughout the Netherlands, the Code Red group organised nine actions. The NGO, which is linked to the “Shell must fall” campaign, demanded the company take “responsibility for complicity in the deaths of the Nigerians … and stop the current human rights violations and pollution in Nigeria”.

In Nigeria, the Movement for the Survival of the Ogoni People (MOSOP) organised a candle-lit procession.

The Nigerian government executed the Ogoni 9, including author Ken Saro-Wiwa, after accusing them of murdering four pro-government chiefs. Coming while Nigeria was under military rule, the trial process was widely condemned.

Extinction Rebellion said Shell had worked closely with the Nigerian government throughout its history.

The activist group also noted recent actions taken by the government against local protestors. A movement critical of a police unit mobilised broad-based protests in October, leading to a number of deaths in Lagos.

The group went on to say Shell had not cleaned up oil spills in Ogoniland. The London group called for Shell to pay reparations to the Ogoni people and for the UK government to exclude the company from climate negotiations and policy making processes.

“Our suffering has not stopped, pollution has increased. The clean up exercise is not happening, yet Shell is planning to return back to Ogoniland for more oil exploration. We are ready to resist any encroachment by Shell in Ogoniland,” said MOSOP president Lazarus Tamana.

Four widows of the Ogoni 9 are carrying out a legal claim against Shell in The Hague.

One step suggested by Extinction Rebellion’s Esther Stanford-Xosei is for the “decriminalisation and complete exoneration” of Saro-Wiwa and other members of the Ogoni 9.

Shell has taken some steps to tackle its legacy of Nigerian problems. The company agreed to pay $15.5 million in a 2009 deal reached with the Saro-Wiwa family, despite denying wrongdoing.

A UN Environment Programme (UNEP), with backing from Shell, has begun work on remediation in Ogoniland. Progress has been slow, with Amnesty International reporting in June that work had begun only 11% of the sites.