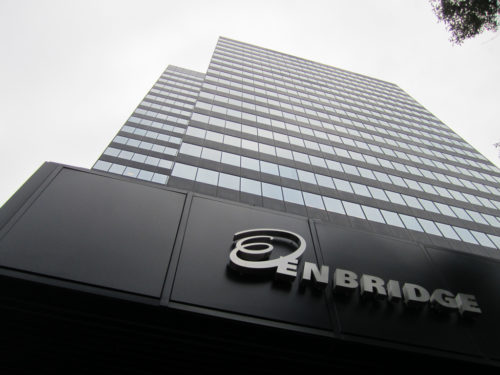 Enbridge Inc. is getting mixed reviews after becoming the biggest fossil in North America to set sights on net-zero greenhouse gas emissions by 2050, beginning with a 2030 target to reduce the emissions intensity of its operations by 35%.

The announcement Friday, which follows similar undertakings by Shell, BP, Total SE, and Repsol, “is a very public demonstration of our level of commitment to making progress on these important criteria and issues that matter to society and to our stakeholders,” Enbridge Chief Sustainability Officer Peter Sheffield told Bloomberg.

“This isn’t our first rodeo at ESG, we’ve set and met targets in the past,” said CEO Al Monaco, adding that the company considers those initiatives “not a nice-to-have but a must-do.” The new targets, he told a conference call, “are about getting even better”.

Monaco “outlined four ways for the company to reduce its Scope 1 direct emissions from owned or controlled sources and Scope 2 indirect emissions from purchased energy and other products,” The Canadian Press reports. “They include modernizing equipment, applying technology to reduce emissions and consumption, using lower-carbon sources of fuel for pumps and compressors, self-powering facilities with solar arrays, and investing in ‘nature-based offsets’.” The Calgary-based pipeliner “also plans to track how its ongoing investments in low-carbon projects such as wind farms affect indirect Scope 3 emissions—which occur in the production and consumption of the oil and gas it handles—without making a specific target.”

Bloomberg had a slightly different angle on that part of the announcement. “Enbridge’s plan doesn’t include a net-zero target for so-called Scope 3 emissions—the ones stemming from the combustion of fossil fuels by cars, airplanes, homes, and factories. For now, the Calgary-based company said it will address those by helping suppliers and customers to cut emissions”, based on its two gigawatts of wind and solar capacity in Canada, the United States, and Europe.

“In addition to investments in renewable energy, Enbridge said it will pursue improvements to its infrastructure, carbon offset credits, and renewable energy certificates,” the news agency adds.

Bloomberg notes the announcement doesn’t apply to projects where Enbridge is present as a joint venture partner. One of those, the 15,000-mile DCP Midstream pipeline network in Texas, “has had 187 unauthorized emissions events that resulted in flaring in the region so far this year, mostly due to power failures, weather, and third-party issues,” the news agency writes, citing filings with the state’s Commission on Environmental Quality. Another example is a cluster of liquefied natural gas (LNG) projects in Brownsville, Texas that “face staunch opposition from environmentalists and other opponents who have fought for more than five years to keep the projects from being built.”

“While these are assets we don’t control, we can and will have conversations with our partners to ensure they have a deeper understanding of the importance of reducing emissions to address climate change,” Enbridge told Bloomberg in an email.

“Investors want to see real decarbonization plans, and until Enbridge accepts the challenge of becoming a 100% renewable energy company, this is simply greenwashing,” he told the Globe. “Using solar energy to power the pumps that push oil and gas through your pipelines can’t hide the fact that you’re still selling fossil fuels.”

Montreal-based institutional shareholder advisor Aequo said it had spent the past two years prodding Enbridge to embrace emissions targets. “Setting a net-zero target is an important step. Investors will now expect companies to demonstrate how they are managing risk and adapting their businesses to continue to create value in a low-carbon economy,” Director of Shareholder Engagement François Meloche said in a release.

But he added that “companies should not only reduce their own direct emissions, but also reduce the emissions of the products they sell, even if these are emitted by other end users.”