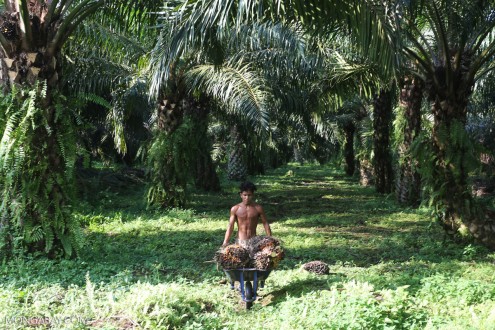 JAKARTA — A coalition of NGOs has documented rampant labor abuses in five oil palm plantations in Indonesia, the world’s biggest producer and exporter of the commodity. The palm oil from these plantations is certified by the Roundtable on Sustainable Palm Oil (RSPO) and ends up in products made by food giant Nestlé.

Among the labor abuses documented by the group Transnational Palm Oil Labour Solidarity (TPOLS) are exposure to hazardous chemicals, a reliance on temporary workers, below minimum-wage payments, lack of maternity and menstrual leave for female workers, and the suppression of independent unions.

In the concession run by PT Agro Kati Lama, an Indonesian subsidiary of Belgian agribusiness group SIPEF, Endang, a 35-year-old worker, has been getting paid a monthly wage of 1.4 million rupiah ($100) for years. The minimum wage for Musi Rawas district on the island of Sumatra, where the plantation is located, is 3.2 million rupiah ($227).

The coalition said this is a widespread problem in the plantation sector in Indonesia.

One of the factors for this is the use of a remuneration system called piece-rate pay, in which workers are paid for their productivity rather than their time.