Bank of America, Citigroup, Goldman Sachs, JPMorgan Chase, Morgan Stanley, and Wells Fargo have collectively racked up $195 billion in fees and penalties, according to Washington-based advocacy group Better Markets. The fees and penalties from 395 major legal cases since 2000 were disbursed among government agencies, investors, and consumers harmed by the banks’ conduct.

The report finds that “the banks’ behavior is deteriorating because it finds their conduct since the financial crisis has triggered more major legal actions than their behavior before it,” the Financial Times reported Better Markets chief executive Dennis Kelleher explaining on Thursday. 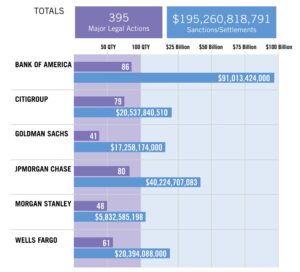 “They’re all major legal actions,” Kelleher was quoted as saying. “It’s not like it was a ‘broken windows’ theory post-crash where prosecutors are fining every little violation.” The Beter Markets CEO remarked:

If they were held to higher standards they all would have been put out of business because the recidivism is really quite shocking.

He pointed to some examples of the cases that emerged this year showing that banks repeated their past mistakes. While financial institutions generally do not admit or deny wrongdoing in most cases, guilty pleas have become more common.

In October, JPMorgan Chase was fined $920 million over its alleged manipulation of metals and Treasury markets. The company “entered into a deferred prosecution agreement in 2014 after admitting anti-money laundering failings linked to Bernard Madoff’s Ponzi scheme and pleaded guilty in 2015 to criminal charges for manipulating foreign exchange markets,” the report notes. Kelleher opined:

Over the last 20 years, JPMorgan has racked up $40 billion in 83 different cases, about $10 billion of which related crisis-era activities at Bear Stearns and Washington Mutual, which it bought when they were in trouble in 2008.

Bank of America paid $91 billion, the highest fees and penalties, in 86 legal cases, most of which were related to “mortgage-related issues that predated Bank of America’s acquisitions of companies more than 10 years ago.” The report adds that $40 billion of the bank’s fines and penalties were linked to Countrywide, a mortgage lender the bank bought in 2008, and billions were linked to Merrill Lynch, the brokerage it bought during the crisis.