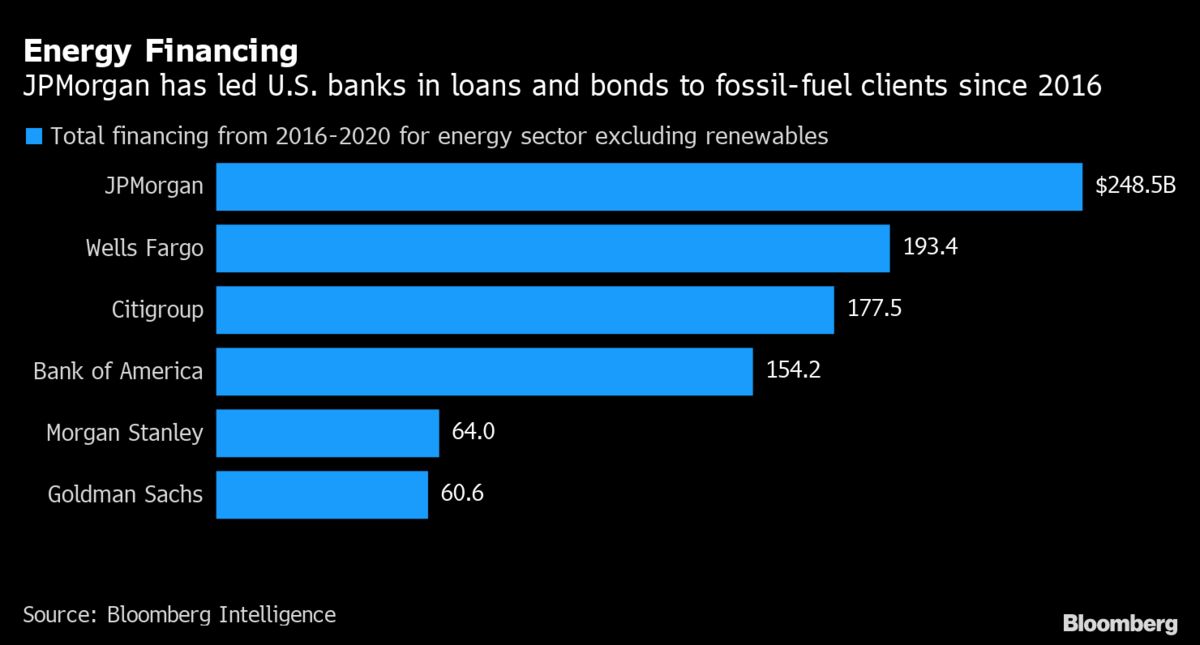 More than any other bank, JPMorgan Chase & Co. finds itself stuck at the center of a fossil-fuel quagmire.

On one hand, the Wall Street giant is the leading financier to corporate polluters. On the other, JPMorgan is the top arranger of green bond sales, the proceeds of which are supposed to go to clean-energy projects.

As every day passes, this kind of contradiction becomes more untenable, as investors and rivals speed ahead to greener pastures.

JPMorgan, the biggest U.S. bank, is among the three largest fee-earners when it comes to advising on mergers and acquisitions and global stock offerings. A defense argument goes that since the bank is so big and has its fingers in so many pies, it’s next to impossible for it not to be heavily involved in financial dealings with climate-unfriendly businesses.

For JPMorgan, that means providing lots of loans and bond-underwriting services to the key perpetrators of global warming: energy companies. The bank’s clients included Exxon Mobil Corp. and Chevron Corp. in 2020, according to data compiled by Bloomberg.

A research note about the banking industry entitled “What Energy Restrictions?” that was published last week by analysts at Bloomberg Intelligence (BI) said JPMorgan provided almost $250 billion of bonds and loans to fossil-fuel companies since the signing of the Paris Agreement in December 2015, about 28% more than its closest competitor.

The Rainforest Action Network has singled out JPMorgan as “the world’s worst banker of climate chaos by far.” While the bank has taken steps to reduce its funding of coal and Arctic oil and gas projects, the climate advocacy group argues that JPMorgan’s recent policy shift falls “short of what’s needed to prevent a climate crisis.”

JPMorgan said in October that it’s committed to achieving operational carbon neutrality and that it’s aligning with Paris Agreement goals to hold the increase in global average temperature to well below 2 degrees Celsius above pre-industrial levels.

The bank also said it will establish intermediate emission goals for 2030 for its financing portfolio, focus on the oil and gas, electric power and automotive manufacturing industries and set targets on a sector-by-sector basis, and continue to support “market-based policy solutions” such as putting a price on carbon.

When asked for details on its recent pronouncements and its reaction to the BI report, JPMorgan declined to elaborate or comment, stating instead that it will have more to say on the topic come spring.