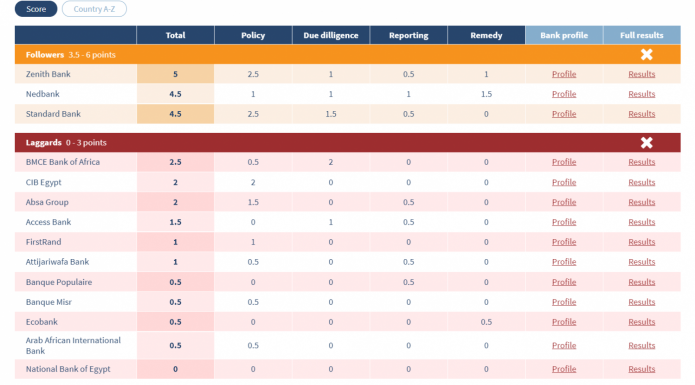 A benchmark of the human rights policies and processes of African banks finds that, out of 14 large banks headquartered in Africa, only four have made a clear commitment to respect human rights. None of the banks covered have a clear human rights due diligence process in place or publish detailed human rights reporting. The benchmark evaluates banks against a set of 14 criteria based on the requirements of the UN Guiding Principles on Business and Human Rights (‘the Guiding Principles’), endorsed by the UN Human Rights Council in 2011.

Nigeria’s Zenith Bank led the ranking of the 14 African banks, with a score of 5 points out of a possible 14. When contacted by BankTrack, Zenith Bank sent a previously unpublished Human Rights Policy, adopted in 2016, and consented to this being published on the BankTrack website. This led to the bank improving its score from 0.5 points to 5 points. Under the policy, the bank commits to respect human rights and sets out a process of human rights due diligence which extends to the companies and projects it finances.

Zenith was closely followed by South Africa’s Standard Bank and Nedbank, both of which scored 4.5. (1) All three banks are ranked as “followers”. The remaining 11 banks were ranked as “laggards” in the benchmark, scoring 3 points or less. Of these, ABSA Bank of South Africa was the only other bank with a commitment to respect human rights.

No banks were ranked in the “front runners” and “leaders” categories, which are reserved for banks scoring more than 6 points and more than 9 points out of 14. In BankTrack’s international 2019 benchmark, 40 out of 50 banks were ranked as “laggards” or “followers”, with only one “leader”, ABN AMRO, identified.

Xklude  Report: How the Pandemic is Affecting Bangladesh’s Garment Workers

The criteria examine four aspects of banks’ implementation of the Guiding Principles: their overall policy commitment on human rights, human rights due diligence (HRDD) process, reporting on human rights and their approach to access to remedy. It does not evaluate banks’ actual financing for companies and projects with adverse human rights impacts. The new benchmark follows the same methodology as BankTrack’s 2019 Human Rights Benchmark, which assessed 50 global banks against the same criteria.

Four banks improved their final scores by providing additional information when contacted with draft scores, including two banks – Zenith and Morocco’s BMCE Bank – which shared previously unpublished policy documents or descriptions of due diligence processes. BMCE Bank of Africa responded providing details of elements of a human rights due diligence process. Although this was limited to finance for “investment projects”, missing impacts arising from general corporate finance as well as other aspects of the bank’s business, this was sufficient to improve its score from 0 to 2.5.