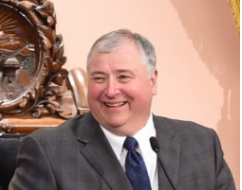 An Ohio federal judge is allowing shareholder litigation to proceed against FirstEnergy Corp., which is accused of bribing an influential lawmaker with $60 million.

The company did so for favorable legislation that would bail out FirstEnergy’s failing nuclear power plants, Judge Algenon Marbley wrote on May 11 when he denied a motion to dismiss.

“Taken as true, these allegations together support this court’s inference that a majority of (members of FirstEnergy’s board of directors) recklessly disregarded their duties to the company and allowed the criminal scheme to continue unchecked,” Judge Marbley wrote.

“Accordingly, the court finds that Plaintiffs have alleged Defendants face a substantial likelihood of liability, and that demand was therefore executed.”

Lawyers at Bernstein Litowitz and Saxena White are leading the class action. Their client – the Employees Retirement System of the City of St. Louis – is the lead plaintiff.

Householder has pleaded not guilty to the alleged bribery scheme, which involved $60 million in payments.

It started in 2016, when FirstEnergy told investors it was seeking “legislative solutions” to the financial problems at two of its aging nuclear plants in Northern Ohio.

Householder was running for a House seat he previously held. He resigned in 2004 after bribery allegations arose. But his district’s voters picked him to retake the seat and he took office in 2017.

FirstEnergy and its subsidiaries put tens of millions of dollars into entities controlled by Generation Now as Householder mounted a campaign to be named House Speaker, it is alleged.

Once speaker, Householder helped HB6 get passed, which charged ratepayers a monthly surcharge. It was essentially a $1.3 billion bailout.