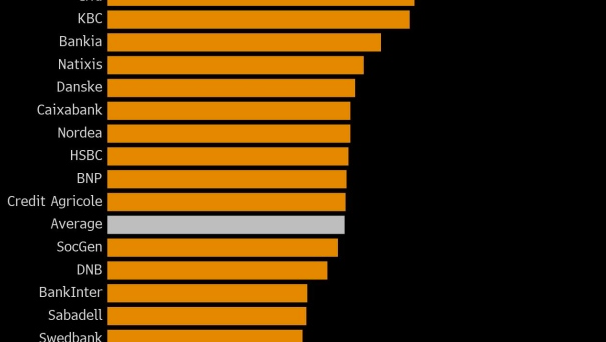 Investors in European banks are finally getting a sense of which firms are most at risk from the upheaval that climate change is bringing to the financial landscape.

A study by Jefferies Financial Group Inc. shows that Commerzbank AG was potentially the European bank most exposed to greenhouse gas emitters last year. Details of the analysis, which were shared with Bloomberg News, offer one of the most comprehensive investigations of the subject yet.

“It’s important to know who has more exposure, who doesn’t and the direction that’s been moving in,” Joseph Dickerson, an analyst at Jefferies in London, said in an interview. “Climate risk is coming to a stress test near you.”

This year, banks appear to be taking climate change more seriously and a number have published emissions reduction targets ahead of the COP26 summit in November. Last month, Commerzbank committed to net-zero emissions by 2050, acknowledging a goal that was enshrined in the Paris Agreement more than half a decade ago. The bank has said it plans to “define specific CO2 reduction targets for the entire loan and investment portfolio by August 2022.”

Commerzbank declined to comment on the Jefferies report, saying its portfolio broadly reflects the German economy. While the bank supports its clients in the transition to a sustainable economy, it also manages associated risks closely, according to a spokesman.

Jefferies says Commerzbank, Intesa Sanpaolo SpA and UniCredit SpA stood out for their high exposure to emissions-heavy businesses because of their concentration on lending to the manufacturing industry. Commerzbank defines itself as the leading bank for Germany’s vast network of small and medium-sized companies, which are also a key focus for UniCredit’s unit in the country. Intesa Sanpaolo is the largest lender to such firms in Italy, European Banking Authority data show.

A spokesman for Intesa said the Jefferies ranking reflects that Italy is Europe’s second-biggest manufacturing exporter. The bank has committed 76 billion euros ($88 billion) in new lending to help companies through the transition, rather than “shy away from them,” he said. “The leading sustainability indexes all rank Intesa Sanpaolo at the top for the sector,” he said.

Similarly, UniCredit said it’s “fully committed” to supporting clients and communities in the energy transition and helping drive the change to a more sustainable economy. The bank takes account of climate in its framework for managing risk and has “restrictive policies” for the most polluting sectors and is working to align its corporate loan book with the Paris Agreement.

Jefferies doesn’t cover Deutsche Bank AG, which therefore isn’t included in the survey. Nor does the report cover banks that aren’t listed on a stock exchange.

The study provides insight into an industry struggling to adapt as the world transitions away from a fossil-fuel-powered economy. It also offers a glimpse of how lenders may fare in landmark climate stress tests being prepared by the Bank of England and the European Central Bank. Institutions that don’t have a handle on their climate risks may have to hold more capital, which will erode shareholder returns.

Investors so far have had little to go on when trying to figure out which banks risk the biggest fallout from a hotter planet apart from the amount of financing they provide to fossil fuel companies.

Firms that rate issuers on environmental, social and governance risks have been faulted for taking inconsistent approaches. Banks have started revealing their plans to cut lending to high-carbon sectors, but such data aren’t comparable across the industry. And European lenders won’t be required to disclose the ratio of green assets on their books until the end of next year.

ShareAction, a U.K.-based nonprofit, says 20 of the 25 European banks it studied have committed to net-zero emissions from their loan portfolios by 2050. But when it comes to the more pressing 2030 goal of reducing emissions by half, only Lloyds Banking Group Plc, NatWest Group Plc and Nordea Bank Abp have made pledges.

“The urgency required to address the climate crisis has not been locked in by many banks and what frustrates me is the disparate nature of all the commitments,” said Jeanne Martin, senior campaign manager at ShareAction in London. “If Barclays can use an absolute emissions target there is no excuse for anyone else not to, and if BNP Paribas’ policy excludes financing for coal developers why can’t other banks set the same rules for themselves?”

Focusing on banks’ balance sheets alone doesn’t give a complete picture of how they contribute to climate change. Underwriting funding via the capital markets accounted for 65% of fossil-fuel financing last year, according to ShareAction.

By tracking changes in exposure and financing volumes over several years, investors can see “who has been making strides,” said Dickerson at Jefferies. His firm’s wider analysis shows that Commerzbank and Barclays Plc made progress in 2020 on metrics such as green-bond financing. Jefferies assigned a lower overall score to Credit Agricole SA because of its higher fossil fuel financing.

As sustainability increasingly dominates the investing agenda, “capital is going to seek out who are the winners and who are the losers,” BlackRock Inc. Vice Chairman Philipp Hildebrand said in a recent interview with Bloomberg Television. “It’s hard to pick the winners and losers, but that’s what we’re here for, that’s what clients want us to do.”