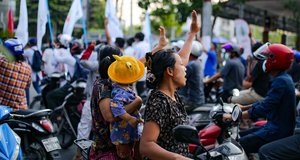 Myanmar’s military illegally seized power on 1 February 2021. Since then, garment workers – mostly women – have been on the front line of the country’s Civil Disobedience Movement, risking their lives and livelihoods to demand an end to the dictatorship and to restore democracy in Myanmar. To maintain power, the military has responded with deadly force to opposition and dissent. It has been reported that at least 55 trade union activists have been killed and 301 union leaders and members of the labour movement have been arrested.

Through collaboration with partners and allies inside and outside the country, Business & Human Rights Resource Centre has been monitoring the significant increase in labour and human rights abuses of garment workers across the country since the military takeover. This cooperation has enabled the creation of our Myanmar allegations tracker, which has so far captured over 100 cases of alleged labour and human rights abuse perpetrated against at least 60,800 garment workers, revealing widespread and systemic abuse of garment workers in international brands’ supply chains. These workers are employed at 70 factories producing for at least 32 global fashion brands and retailers, including adidas, Bestseller, C&A, Inditex (Zara & Bershka), Fast Retailing (GU), GUESS, H&M, Lidl, Next, Matalan and Primark.

The data highlights the scale and scope of abuse in the 18 months since the military seized power and the widespread impunity enjoyed by perpetrators. It raises serious questions for apparel brands and their investors regarding their ability to source responsibly, conduct human rights due diligence and protect workers in their supply chain. Wage theft, inhumane work rates and mandatory overtime, and attacks on freedom of association are the most frequently recorded types of abuses. Cases also include killings, arrest and arbitrary detention of workers by the military, gender-based violence and harassment, mandatory overtime and child labour. The cases are likely the tip of the iceberg, given the severe restrictions on civic freedoms and reporting under the military rule and risk of reprisals for workers who speak out against abuse.

Despite calls from local and international unions for international brands to withdraw from Myanmar until democracy is restored, only two companies (Tesco and ALDI South) have exited. Labour groups argue brands which remain in Myanmar are benefiting from labour rights repression under military rule and prioritising profits over human rights, in a jurisdiction where garment workers – 90% of them women – are now earning less than US$2 a day. In these circumstances, apparel brands must remember inaction is not an option: at a minimum, they must undertake heightened, ongoing human rights due diligence to determine whether they are able to responsibly source from Myanmar suppliers; where they are not, responsible exit strategies should be considered to abide by the international standards brands have adopted.