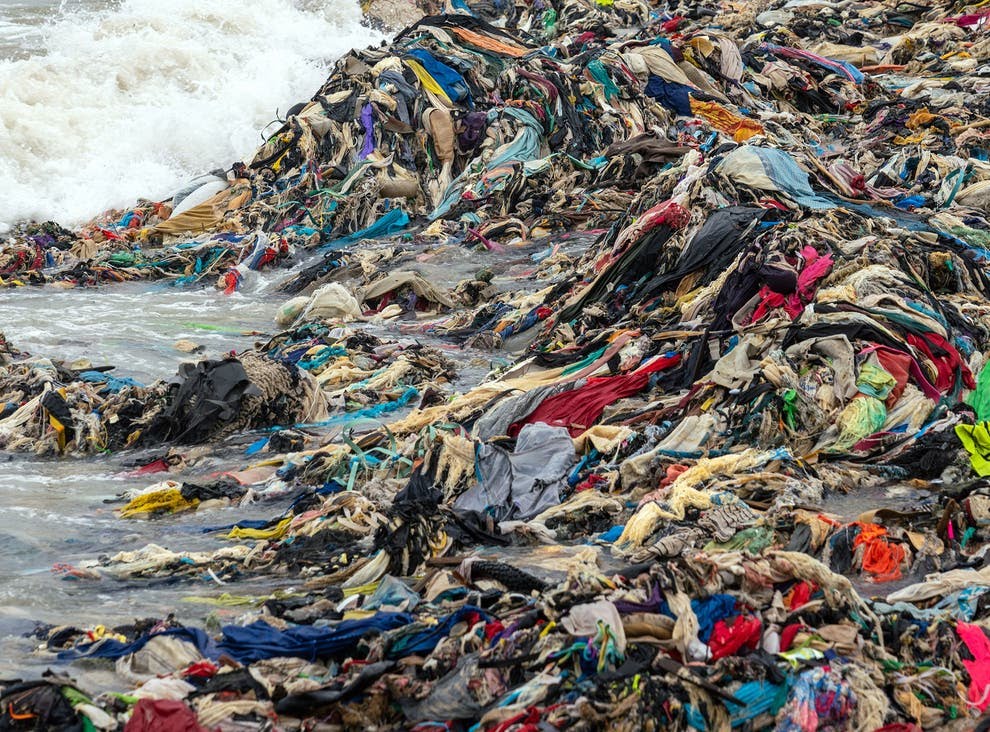 More than one hundred million items of used clothing drop from circulation and go to waste each year in Ghana’s capital alone.

Huge piles of discarded clothes line a beach in Accra, capital of Ghana.

The rags started life thousands of miles from the Gulf of Guinea and their coming to rest on this West African coast reflects the shortcomings of a huge global trade buoyed by fast fashion.

Ghana is the third-largest importer of second-hand clothing in the world and its market for used garments is so strong that traders of new lines struggle to compete.

Second-hand clothes enter the country from distributors abroad – Britain and the US are the biggest players – and are sold in bulk to local dealers before hitting the market stalls.

It is no circular economy: More than one hundred million items of used clothing drop from circulation and go to waste each year in Ghana’s capital alone.

Muntaka Chasant, a photographer based in Accra, knows where a good deal of this waste ends up.

He tells The Independent of his trip this week to the beach at Jamestown, an old district of the capital that is home to a fishing community.

Having been there before Mr Chasant knew what to expect but was nonetheless disappointed when he saw dense mounds of clothing lining the seafront.

The wall of clumped fabric bothers the locals, as it blocks the path of their boats into the ocean. But it is sure to be more bothersome to marine life, given activists who monitor the capital’s beaches say the waste visible from the shore is like the tip of an iceberg.

Mr Chasant spoke to Nii, a 20-year-old fisherman who was wading knee-deep in floating rags. He told the photographer: “This makes me upset. None of us living along these shores have anything at all to do with these. We are already under stress from the lack of fish in the ocean, and now this!”

As he walked along the beach with some of the locals, Mr Chasant wondered aloud where all the clothes could come from.

“They are from Kantamanto!” an exasperated fisherman blurted out.

Kantamanto Market is an enormous trading hall for second hand clothing situated in central Accra. Some 30,000 people work sorting, washing, mending and selling the roughly 25 million garments that pass through its stalls each month.

A common collective term for the market’s wares is Obruni Wawu – a phrase of the Twi language spoken by millions in West Africa meaning: dead white man’s clothes.

Around 40 per cent of the clothes received by traders never find a second-buyer and end up in landfill or the ocean, washing downstream through Accra’s open gutter system after being discarded.

Liz Ricketts, co-founder of Or Foundation, a sustainable fashion advocacy group, keeps track of what ends up on the shore. Or has a team of nine locals who walk along sample stretches of Accra’s coast each week to count how many new bundles of clothing have washed up. They separate the bundles and check each item for a label.

Fast fashion giant H&M is one of the most common brands found, as is Gildan – a t-shirt brand known for custom designs popular with hen and stag dos. But other common brands include Nike, Marks & Spencer and Next, brands not normally associated with disposability.

Or works with traders in Kantamanto to promote methods of recycling waste clothes, such as shredding the material to sell as insulation.

But even the best practice by traders cannot bear the weight of the used textiles market and Ms Ricketts says if there is any hope for ridding Accra’s beaches of the trade’s waste, the exporter countries need to discourage brands from producing in excess.

“The second hand clothing trade is a business, it’s not recycling, it’s not waste management and its not charity. It’s a supply chain and that’s how people need to think of it,” she tells The Independent.

“What’s needed is extended producer responsibility.” A tax that puts the burden on clothing producers to pay for their own waste, with the money raised sent to importer countries to help with waste management.

It is a difficult corner to fight given that brands do not want to admit they are producing waste and governments are keen to hold on to their tax revenues.