Many large global companies have now set a target for getting to net-zero greenhouse gas emissions. But with most of those deadlines decades away, it can be difficult to tell if they’re on track now.

Companies have varying standards of setting short-term climate goals and differing ways of assessing whether they’ve achieved them. In a recent analysis, Bloomberg Green took stock of the five-year sustainability goals some of the biggest U.S. companies had set in 2015. The results showed that 138 out of 187 pledges had been met, partly because they were modest to start with.

Net-zero emissions goals are much more ambitious than promising to plant more trees or boosting energy efficiency. It’s likely the companies setting them have to make more drastic changes. A new report by the Science-Based Targets initiative (SBTi), a non-profit that helps companies translate the Paris Agreement’s aim of keeping global warming under 1.5°C into concrete measures, finds that bears out in reality.

SBTi analyzed 338 companies that had set targets guided by science, which requires goals not just decades out but also measurable emission cuts in the short term. The list covers a broad range of industries from software to pharma and mobile networks to utilities. The report concludes that between 2015 and 2019 these companies reduced Scope 1 and 2 emissions—those generated by their own assets and in purchased electricity—by 25%, even as global emissions rose by 3.4% in the period. 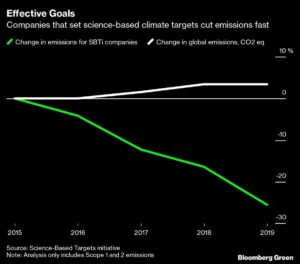